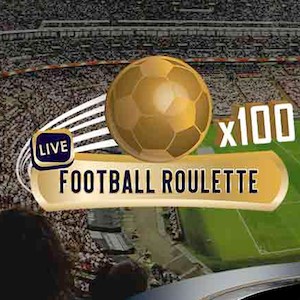 Playtech is bringing Live Football Roulette back, and fans couldn’t be happier. The Live Roulette title originally launched nearly two years ago, and received an enormous amount of attention from sports fans. Though, the original version was referred to as Football Weekend Roulette, and only broadcast in specific weekend time windows.

But, after popularity for the concept went through the roof, coverage began to extend to weekdays, allowing fans more opportunity to get in on the fun.

Now Live Football Roulette has a dedicated studio. Playtech invested in a dedicated broadcast space for the game, with a great many more sports themed titles on the way. The new studio is appropriately called Let’s Play and will be handling all of Playtech’s Live title that feature a sports related theme.

One of the most interesting aspects of Live Football Roulette is that it doesn’t just have a theme based around football. The service is specifically online during popular football events, as they happen, providing coverage of the match while also offering Roulette betting options. So those who play are kept up to date with the match, even as they put down bets on their lucky numbers.

Commentary is also available, giving up to date information about the match, as it happens.

However, Live Football Roulette is not returning without any new features. The new Goal Side Bet has been added, which kicks the excitement onto a whole new level.

With Goal Side Bet, players are given the option to instantly place bets on 5 random numbers. This saves time, and allows those that are more interested in following the match the option to participate without having to extend too much thought. But, these numbers are also granted multipliers, meaning that if they do succeed, the payout is significantly higher than normal.

Edo Haitin, CEO of Playtech, offered a few thoughts on Live Football Roulette. He reiterated that the title had originally launched as a promotional concept, serving to spread word about the services the company offered. But, he explained, the concept quickly became one of the most popular in the company’s portfolio.

The popularity meant, Haitin explained, that a fuller, more permanent version had to be launched ASAP, hence the building of the Let’s Play broadcast studio. With Let’s Play now online, Haitin concluded, fans are able to enjoy the beautiful game as it happens, while putting a few bets down along the way.