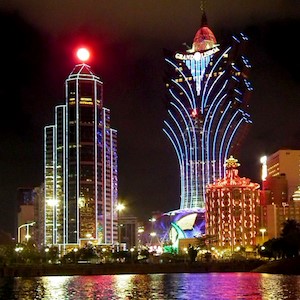 It’s no secret that Macau is one of the world’s foremost gambling hubs, second only to Las Vegas in the United States. However, it might be surprising to learn that the Chinese city has been facing some difficult economic challenges lately, in part due to its status as a Chinese territory.

The Chinese economy’s on going slowdown and trade war between the Asian nation and the USA has taken a serious toll on the casino industry. This issue has been straining Macau for over a year now, but the effects are only becoming more pronounced as time wears on.

Recent figures released by the government of Macau have revealed that the city’s economy has been shrinking consecutively. Income dropped for the second consecutive quarter in 2019, and financial projections are predicting a similar pattern for the rest of the year as well.

Data released by the Statistics and Census Service (DSEC) late in August shows that the economy of the China-controlled region shrunk by 1.8% year on year in the second quarter of the current year. The economy also declined by a concerning 3.2% in the first quarter of 2019.

The overall decline in the Macau economy has been estimated at around 2.5% for the first 6 months of the year. This might not sound significant, but should the trend continue, it might soon lead to the shuttering of local casinos and businesses, not to mention consolidation efforts to help smaller operators stay afloat.

The DSEC has blamed the city’s year on year decline in fixed capital formation for its faltering economy. The region’s gross fixed capital formation fell by a whopping 25% year on year in the second quarter of 2019. The export of local gaming services furthermore dropped by 0.8% over the previous year, while the export of goods fell by a devastating 24.4% to add insult to injury.

Speaking about these trends, the Office of the Secretary noted that given the constant increase in ‘external uncertainty’, they expect that the economy of Macau will continue to bear the brunt of recessionary pressure during the second half of the current year.

The casino gaming sector, which accounts for over 63% of Macau’s local economy, has also been underperforming over the past few quarters. It was in August when the city’s gaming revenues unexpectedly declined by 3.5% year on year, leaving local businesses unsure of what the future will bring.