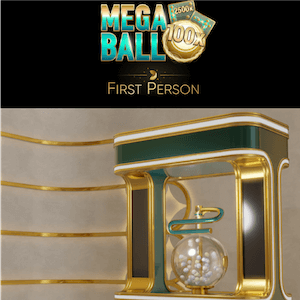 According to Evolution Gaming’s official release, Mega Ball is a vibrant and colourful new game that can be played for real money. It is set in a modern studio, and its primary feature is its custom-made ball drawing machine. The machine contains 51 colourful numbered balls that are integral to the game’s outcomes.

Mega Ball pairs Bingo-style mechanics with the numbered balls of a classic lottery. The result is a title that offers all the best features of online live dealer games, along with elements of an exciting game show.

Evolution Gaming also says that the title features 2 custom-created bonus rounds. These mini games provide players with the opportunity to win even bigger potential returns thanks to additional win multipliers. The developer’s press release noted that players will need to get as many lines per card as possible in Mega Ball. If they can achieve this, they will be able to significantly boost their chances of winning big.

The casino game is also simple to play. Players will be asked to set the value of their cards and wager on a number. Wagers range up to 200.00 per round. The balls will then be drawn from the machine, and those that match the numbers on their cards will form winning lines.

This is easy enough, but Mega Ball also has a number of extra features to keep things interesting. The game has a multiplier concept at its core, alongside Bingo game mechanics that will appeal to players of all ages. Its RTP ranges from 95.05% to 95.40%.

A total of 20 balls will be drawn from the drawing machine at the start of the game. The matching numbers on players’ cards will be marked off automatically, and cards can also rearrange themselves in the user interface on offer. The numbers a player will need to reveal to win will be highlighted above the cards along with possible winnings should those numbers be drawn.

Once the last ball has been drawn, a Mega Ball multiplier between 5x and 100x will be picked at random. This will change the studio’s lighting and the player interface, building excitement with potential wins of up to 1,000,000x your bet! You could even trigger the rare 2nd Mega Ball for even bigger potential jackpots.