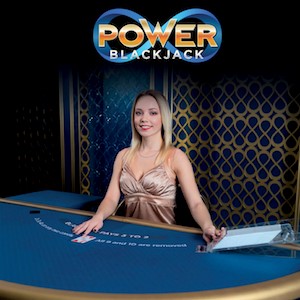 Evolution Gaming’s Power Blackjack continues the tradition of offering players an unlimited number of seats positioned at a single live table. The game does however deviate from how the other titles in the developer’s range are played in that a slew of additional bet options have been included. Extra bet options include doubling, tripling, and even quadrupling bets placed on the initial two cards dealt to the player.

The original concept behind the development of Power Blackjack was to present to players more of what they first loved about classic 21. This according to Evolution Gaming chief product officer Todd Haushalter. And this is absolutely evident when considering exactly how the developer has gone about constructing its new Power Blackjack game.

The live casino game is played with eight decks of playing cards. The difference this time round is that the 9s as well as the 10s from each deck of cards have been removed, leading to a shoe effectively 64 cards lighter. This was done so as to open up more possibilities for the development of various new gameplay strategies. A further change, in addition to the additional bets added into the mix, is the leaving out of the Six Card Charlie rule.

The mission, continued Haushalter, is to treat players to an innovative new live casino games, but in such a way so as to not deviate too far from the original rules of classic 21. Haushalter said that Evolution Gaming is aware that players will always love classic Blackjack better than any variation. And its for this reason that the goal is now to provide to them innovation without changing the original gameplay underlying the classic version.

Evolution Gaming has been quite busy creating new inroads for further growth in the booming US live casino games market. The developer during the month of May entered into a strategic new partnership with leading online iGaming platform goldennugget.com, which is of course the digital division of the famous Golden Nugget Casino brand.