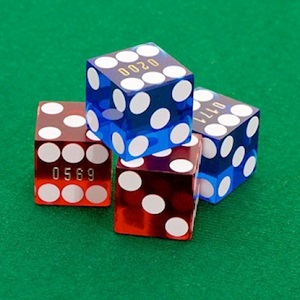 Evolution is widely seen as the live casino game leader of the iGaming industry, and for very good reason. The company has been having a bumper year, not only recording record growth and revenue, but also having recently purchased legendary developers NetEnt. But having already gone beyond expectations in 2020, Evolution has made yet another big move; announcing their much anticipated next release; Craps Live.

It was hinted that Craps Live would be up and running later this year, but without any specific dates being revealed. Either way, no matter when the new game starts broadcasting, it will probably be the first new title since the company officially announced its rebranding from Evolution Gaming.

More Than A Name

Going from one name to another, very similar name doesn’t seem like such a big change. But, according to a company spokesman, it is more than just a simple rebranding; it is an indication that the company as a whole is entering into a new era.

The spokesman explained that the studio wants to be seem as more than just a creator of iGaming live casino games, although that is, of course, the primary focus. In creating titles like Craps Live, the spokesperson elaborated, there is far more going on behind the scenes than meets the eye.

It was pointed out that the company has now become exceptionally efficient at designing, and building, world class broadcast studios, which are essential for making Live games operate effectively. Putting together these operations is no small task, the spokesperson pointed out, making Evolution a specialist in more than just the games themselves.

The rebranding, the spokesperson concluded, aims to reflect these industry skills, and communicate to the industry at large that the company can offer more than just games.

So the rebranding seems to be official, and will reportedly already start being used in terms of brands, logos, and on all digital platforms. However, as far as the legality of a corporate name change goes, the alteration won’t technically be final in the eyes of the law for some time. But not to worry, by the 16th of April 2021 it should all be sorted out.

In the meantime, what most are interested in is Craps Live. Those keen on testing out their dice skills will have the opportunity to do so fairly soon, which is certainly great news. Plus, given that this is an Evolution live casino game, chances are there are going to be a few unique and interesting betting twists thrown in for good measure.