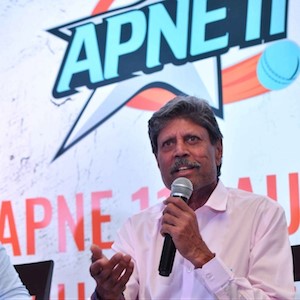 Kapil Dev, the legendary former cricketer, recently attended a very special ceremony premiering a brand-new daily Fantasy Sports site, Apne11. Reports have revealed that the 60-year old retired athlete will be serving as brand ambassador for the site, helping to promote its services to Indian aficionados of the gentleman's game.

Dev famously has 940 world-class appearances under his belt, accomplished during his career that spanned 16 years. Speaking at the event, held at New Delhi’s Lalit Hotel, he revealed that Apne11, a totally mobile-friendly offering, would also run an exclusive Kapil League promotion. The highest-scoring player taking part will receive ₹2475,50, and if this isn’t enough of an incentive, 5 participants with the best scores will also be meeting the captain of the team that managed to bring home the 1983 ICC Cricket World Cup!

Dev spoke of his pride in being associated with Apne11 because it will allow millions of like-minded cricket fans to compete against one another. He said that it would be connecting to other devotees and the sport itself on a far deeper level than ever before.

Akshay Jaggi, Chief Executive Officer for the new Fantasy Sports hub, used the occasion to let it be known that his organisation would be working towards making Apne11 the no. 1 platform in the country. He promised to deliver the best possible experience to cricket-mad Indians, despite having to take into account competition from a slew of recently arrived rivals.

Jaggi called the company a customer-oriented one and said that the decision to launch the innovative site into the Indian market was a natural one. He stated that his team is going to focus on becoming the 1st and only choice for Fantasy Sports players.

More About the Site

Owned and operated by Innovative Play International Private LImited, Apne11 is designed to appeal to people who are passionate about cricket. It provides excellent support to fans and grants them the opportunity to finally put their knowledge of, and skill in, the game to profitable use.

Users will be able to assemble their dream team with real players on the actual field, and will then be awarded points when the match ends according to how these athletes perform. This points total will then decide who is the overall winner.

Providing a perfect blend of state-of-the-art security and seamless gaming, Apne11 is set to change how Indians enjoy one of the most popular sports on earth.